Welcome to our website, the online home of our Australian Research Council (ARC) funded project, Popular Music and Cultural Memory: localised popular music histories and their significance for national music industries. Visit our site regularly for updates on our research's progress, as well as links to our project's outcomes as they appear. Find out more about our project and its aims here.

The third International Conference on Re-thinking Humanities and Social Sciences will be held this September at the University of Zadar, Croatia.  With the theme speaking to 'The Politics of Memory', the conference will be wonderful opportunity to present some research from our project and meet with other scholars working on memory in the humanities and social sciences.  Two papers based on work from the project have been accepted for inclusion in the programme:

Read more »
Posted by the project team at 1:13 PM No comments:

Now that data collection for the project is almost at an end, it's time for the team to shift focus to writing up the research. With this task in mind, the project team met for a two-day writing retreat in May. The aim of the meet-up was to circulate writing samples amongst the team, and obtain feedback on work in progress. We also had an opportunity to workshop a range of ideas for future publications, many of which will be collaborations between team members.

Here's a brief snapshot of the sorts of things that we're working on at the moment. Details of final publications will be posted on the website in the coming months.

Read more »
Posted by the project team at 4:01 PM No comments:

Our Israeli partner investigator, Motti Regev, is currently visiting Brisbane and will be presenting a seminar paper at Griffith's Gold Coast campus today. His paper will provide a summary of key themes arising from the interview data collected in July/August 2011, when Sarah and he conducted fieldwork in Tel Aviv.

Also at the seminar, Sarah will be presenting a paper about the social and cultural functions of the Victorian Jazz Archive. The paper, co-authored with Alison Huber, considers the important work being done at this DIY institution by volunteers as they seek to collect, preserve and make public Australia's jazz history.

Posted by the project team at 9:34 AM No comments:

Publication: Locating the Canon in Tamworth

Sarah and Alison have co-authored an article about the appearance and construction of a country music canon in Tamworth, Australia.  The piece will be published in a forthcoming edition of the journal, Popular Music (2013, 32(3)).  The article is based on fieldwork Sarah and Alison undertook in 2011, and is interested in the means through which certain aspects of popular music's historical past comes to be remembered over others.  Read the abstract here:

Read more »
Posted by the project team at 2:17 PM No comments:

Our project in Adelaide, Canberra, Sydney

Project team researcher, Ian Rogers, has been gathering interview data in Australian capital cities over the last couple of months, and has spoken to dozens of locals about their city's music scenes, and the personal memories that coalesce around music practices there. First stop was Adelaide, a place whose vibrant music scene sometimes doesn't receive the recognition it deserves. Ian visited lots of music venues in the city and found a community of enthusiastic music listeners who were keen to participate in our project. Next on the itinerary was our country's capital, Canberra. On the day Ian landed, the Canberra Times featured a nostalgic piece on the twentieth anniversary of US band Nirvana's performance in the city, which set an appropriate backdrop to a series of interviews with people involved in the music scene there. Last stop was Sydney, where Ian interviewed a range of performers, audience members, record store workers, and radio people, and spent time exploring the city's inner city scenes that weekend visitors are rarely able to experience without a guide.

Read more »
Posted by the project team at 2:38 PM No comments:

The final two stops on Sarah's international fieldwork trip were Seattle and LA. This enabled us to include in the research two more of America's popular music museums. In Seattle, Sarah visited EMP, a museum dedicated to popular music and science fiction and which is gradually expanding to a broader focus on popular culture more generally. In downtown LA, a trip was made to The Grammy Museum which showcases the history of the Grammy Awards, but also charts a number of key moments in popular music history through the use of interactive displays.

Read more »
Posted by the project team at 4:54 PM No comments:

Email ThisBlogThis!Share to TwitterShare to FacebookShare to Pinterest
Labels: fieldwork

Sarah is currently soaking up all things country in Nashville, Tennessee. Given her visit to Tamworth, Australia's 'country music capital', at the start of the year, it was fitting to include 'Music City' into the US leg of the international fieldwork. The popular music heritage industry in embedded in the fabric of Nashville, with its 'Honky Tonk Heroes' guitar artwork:

and its 'Walk of Fame Park' 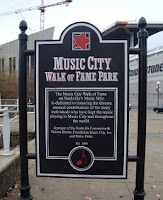 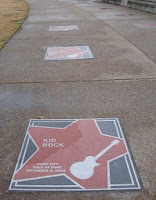 But the key focus of this trip was the Country Music Hall of Fame and Museum, which is perhaps the most impressive of America's music museums.

One of the great things about this museum is that it makes overt the connection between the display material and the archive, with visitors able to see into the Frist Library and Archive as they view the other exhibits. Interactive consoles also give visitors the opportunity to access selected images from the archive's photo portfolio as well as an opportunity to explore some of the "rare record spins" to be found in the collection.

Posted by the project team at 4:48 PM No comments:

For the last month or so, Sarah has been in the USA chasing interview leads and visiting popular music archives and museums. She began in New York City where she interviewed the folks who collect, catalogue and preserve the massive vinyl collection that is ARChive.

This was followed by a trip to Cleveland, Ohio, for a tour of The Rock and Roll Hall of Fame and Museum, and it's special exhibit 'Women who Rock: Vision, Passion, Power'. This visit coincided with the 16th American Music Masters week, meaning Sarah also had an opportunity to attend a series of events honouring the work of Aretha Franklin.

Next stop was Atlanta, where Sarah met with another of the project's partner investigators, Professor Tim Dowd. Unfortunately, some months earlier had seen the closure of the Georgia Music Hall of Fame in Macon, Georgia, a place Sarah had originally planned to visit. The closure of the GMHF is indicative of the serious funding issues faced by many small popular music museums in the US and elsewhere.

While in Atlanta, Sarah caught the Smithsonian's traveling exhibition 'Ain't Nothing Like the Real Thing: How the Apollo Theater Shaped American Entertainment' at the Atlanta History Center, and also visited the  Georgia State University Library where she was given a detailed tour of the Popular Music and Culture Collection which houses many important artefacts relating to the lyricist/composer/performer Johnny Mercer.
Posted by the project team at 3:54 PM No comments:

Our project returns to Iceland

Sarah made a brief return trip to Iceland this month to do some follow up interviews at Tonlistarsafn Islands, the Icelandic Music History Museum.
Posted by the project team at 3:18 PM No comments:

Our project visits The Netherlands Institute of Sound and Vision

Still in the Netherlands, from 30 September to 7 October Sarah was based in Amsterdam where she made a trip to Hilversum to visit  Beeld en Geluid, the Netherlands Institute of Sound and Vision.

Beeld en Geluid houses a massive underground audio-visual archive (reportedly over 70% of the country's audio-visual heritage), and the facilities are rather impressive as the photo below indicates: 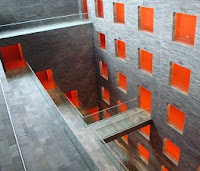 In addition to its archival facility, Beeld en Geluid also hosts "The Experience", a range of interactive exhibits including a 'Pop Studio'.


Posted by the project team at 3:10 PM No comments:

What do we mean by 'cultural memory'?

The project team has visited...